7Years 7Smoke: Event of the Month Runner-Ups
By Mauritsio
2019-01-21 22:26:55
A few days ago you were all able to vote on your Event of the Year for 2018. The nominees from this category were the winners of every month's Event of the Month. On the flip-side, that means that a lot of other events had to be neglected. Some of which are the personal favourites of many members. That's why, with this article, I'll give the runner-up events for every Event of the Month poll some love by "recapping" them once more! I think you'll find that one event you wish ended up making it in, too.


January: The 7Smoke Awards: Winner's Ceremony!
Funny that'd we almost be voting for an Awards Ceremony at an Awards Ceremony. But then again, it might as well have been worth it - who couldn't forget this happening? The voice chat was filled to the brim with people stopping by to look back at the great year we had in 2017. With blues music playing in the background, we laughed about those Sven events we had, we looked back on our favourite memes, we complained about Harry not being a nominee for Modder of the Year, and mostly everyone kept having to turn their volume down because a certain show host shouted far too loudly into the microphone. One moment I'll also rarely forget of this event is the announcement of Movie of the Year's winner, and the abundant emote spam that happened as a result. 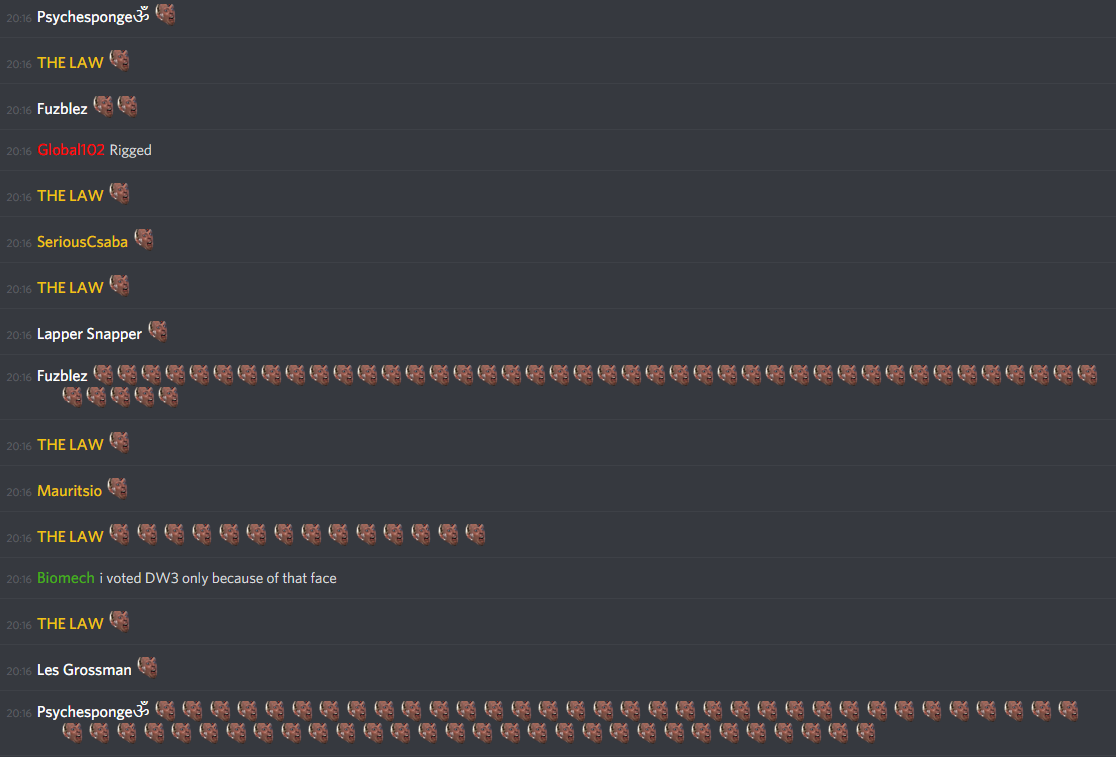 February: Serious Fantasy Fusion: Random Weapon Swap
Ah, back in the days when gibbing someone with a shotgun could crash the entire game. This event we used the Random Weapon Swap mod to give everyone a different weapon and duke it out against one another with those -  but in the end it felt more like a test trial to see which guns crash the game and which don't. Fusion was a minefield back then. Bugs like this (anyone 'member infinite view bug?) hardly show up anymore but it's fun to remember the times we had to endure it. And at one point during this event, we just got tired of trying and failing all the time so we just ended up playing Beast Hunt eventually, and we ended the event on that good note. Picture only somewhat related, but hey, here's Csaba doing a T-pose. 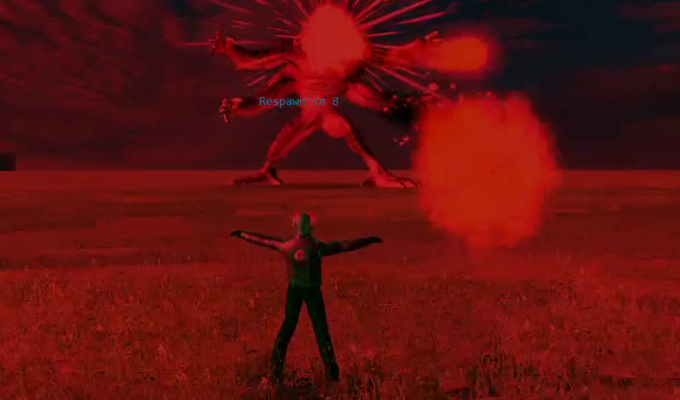 March: Garry's Mod Slashers
Allow me to let you in a little secret. Remember the Event of the Year "trailer" video, and how we put some Slashers footage for April's winner in it? I have a terrible truth to tell you: that's not the April event, it's this one! I am very sorry about this deception. Sadly, just no footage existed of this event, so I had to make do with what I had and steal from this video by Goldfreak (I stole the video... with his permission!). But Slashers sure had something going for it this month as Roy kept having to "pep-talk" people into voting for it all the time. It lost the battle against Horsam eventually, but it got its revenge next month! This event sits next to the Event of the Year throne in sprit.

April: Halo Online/Eldewrito
This is one particular event that I'm very sad didn't make it in - but that's just how it is. Eldewrito allowed us to play Halo Online, a previously Russian-only multiplayer game directly taking maps and modes from Microsoft's flagship franchise. I can hardly forget all the times I laughed and had fun during this one. Running each other over with Warthogs while unconditonally trashtalking one-another - or the time we disbanded from traditional Red vs Blue and started playing Red vs Blue vs Brown vs Green - and the Brown Team actually won with a player disadvantage! This one goes out to my hood homies Lapper Snapper and Owlet VII. Speaking of Owlet, we could all congratulate him with his newborn at this event. He seems to be doing well.

May: TTT Celebration for Owlet
At 7Smoke, we always say, "there's no better way to celebrate a special occasion than by constant betrayal". Or at least, this is what we used to say back in the days. Now we don't really do birthday bashes anymore. Oh, but this wasn't actually a birthday bash - we set this event up for Owlet as to commemorate his departure from mandatory military service! My recollections escape this event (those memories - they all blur together so easily), but looking back at it, it seemed like a clear-cut traditional TTT event, with some gravity grenade goodness to close it off. Seriously, bench was right - how come nobody ended up using that thing more often? Makes for great screenshot potential overall.

June: IHRB Stream: Bully Roy & Noam
What's this, I hear you say? A stream garnered this much attention? Well, yeah, since it's the closest thing we could have to a I Hate Running Backwards event. Our members could hop into the Twitch chat and spawn enemies to try their best to murder Roy and Noam - Roy trying to do his best to teach the "little jew" as much of his skills as possible, by playing the first round with all curses on. Okay, he didn't really do that, but he sure did try to! And even then, along the way, it was just Roy screaming at Noam, me occassionaly messing up Roy's controls (I was hosting for them), and from time to time, Noam actually making it past the desert level. Noam, I want you to know that I'm really proud of you. One day you'll top Strike on the leaderboards.

July: 7Smoke Cinema: You, Me and Dupree
Ok, yes, we forgot to put this one in the Movie of the Year. I hope it didn't make much of a difference because only a few people attended - but for those that did - the oldest, most dedicated members will know the origins of the group name "Seven Different Kinds of Smoke" - it's from actor Owen Wilson's quote in this very movie. Turns out it's said more than once, too, so we had some great meme material to post in the 7smoke-cinema channel after the event. In fact, this event almost had an art contest, which is why from a distance you might have thought we had a Street Fighter event. Turns out Pan is just really, really good at photoshopping. I, surely, was almost completely fooled!

August: Quake 3 Arena: Fusion
The runner-up to the Quake 3 Arena event is... another Quake 3 Arena event? Yes, this mod was kind of a big deal when it came out. Actually, the Event of the Month votes were pretty much entirely the Quake 3 Arena events only. I hope that tells nano what people like about this mod. For this event in particular, there wasn't as much spaghetti as the last one, but we tried out some different maps and gamemodes as opposed to the regular set of Q3A defaults. Such as Pan's CTF map, and after a few more rounds of CTF, turns out that was bugged too - flags not being pickable for whatever reason. And I'd also like to bring more attention to this moment, which none of you saw on your end - but I sure was losing it, and nano later experienced the same thing:

September: IHRB Fusion
Another I Hate Running Backwards event? Yes, it's almost like it was the only "major" Sam release this year! So let's do everything except have events on the game itself - porting the first two levels to Fusion seemed like a good start. While I didn't have to shout at anyone for not looking out for those mines this time, we did need to explain to everyone that this mod is about *Running Backwards*, and that means you don't look forward. Ever. Seems like we need to communicate that better next time. Althought it turned out fruitless, since I don't think we were ever able to beat the map even once. This one goes out to everyone who didn't stay close to the pack and messed it up for the others. Thank you very much!

October: UNO MAS! Seriously! Kart HD:TSE
The best mod on the Workshop, according to Roy. Actually, no, maybe it was Serious Box Solid? I can never tell the difference with him, honestly. But thanks to this event we were able to bring back a full 16/16 server to HD:TSE - goes to show we don't need no Fusion to make events lively. You can imagine that the starting lines got very crowded. The races themselves, too, thought that tended to make people disappear, get flung across maps or be forced to walk the entire way. When the event was dying out one thing I really "enjoyed" doing was creating a roadblock on the Big Blue map as fast as I could before anyone could finish a lap. Man, my hopes for Seriously Kart Fusion is even higher now. Bring it on, Pan! ...When SS4 comes out.

November: A Three-Way Tie?!
Usually we were able to resolve ties thanks to tiebreakers. In the case of a runner-up place, that's not really needed for the Event of the Month awards, since if a winner is clear enough we'd stop there. But clearly I didn't plan ahead, since now I'm stuck with a problem here - the second place for November is tied between three events! The events sharing a seat are UNO MAS: A Nightmare Revisited (The Portal), UNO MAS: Alien Swarm Reactive Drop and Quake 3 Arena: Fusion + Procedural Skyways. I can see why all of these made it - one of them would much rather just be forgotten for a long while, the other is host to the longest event recap on this site, and the latter spawned a very literal meme.

December: Christmas TTT
Fun fact about this one: for the longest time, the poll indicated that this was the event that was going to win Event of the Month December! When I found out it really took me by surprise - wasn't Tennis the event that everyone was anticipating for like, an entire month? It did end up winning after I reminded a few people who I knew would vote for Tennis in a heartbeat - but wouldn't that have been a little funny? I mean, I'd gladly give it to any TTT event, but still! For all the events this year, TTT got runner-up place two times, which means most of us aren't quite ready to let the 2016 craze fully go yet. But I think it can work perfectly as our very final TTT event, just because of that amazingly nerve-wracking last round. At least, it was for me, and Pan made this meme perfectly describing the situation.