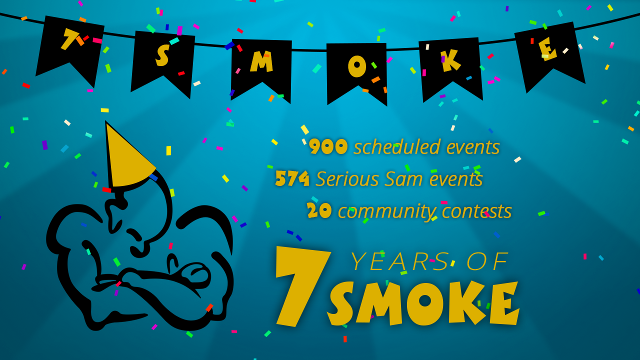 I remember this moment from way back in 2014, when we were celebrating our group’s 2nd anniversary. We were making jokes and memes about how the group would be seven years old someday - and here we are anyway. I would never have expected 7Smoke to play such a central role in not just my life, but also the lives of many other members. Back when I founded this group in 2012, the sole reason was to find people to play BFE Survival with. Seven years is an incredibly long period -  most communities collapse or go inactive around the fifth year, and most who live past that have a huge quality decline afterwards anyway. To be witness that 7Smoke has kept its quality fairly consistent over the years is a great thing to take note of that.

As with every family, there are ups and downs - for ups, we had a lot of new people coming in and clicking with all of us from the first meeting, but also downs - a lot of people, especially the older faces, have been forced to say goodbye to 7Smoke for various reasons. To quote Vanya, “It’s amazing that 7Smoke has lasted so long considering the amount of different personalities the group holds.“. And another fun thing I have noticed, is that whenever a trouble-causing person leaves or gets kicked - they always say “7Smoke is gonna die now for sure!“. As if they were the key element holding the group together. Call us sadistic, but it always makes us laugh whenever this happens, even though we tolerate the actions of our group members to a high (yet reasonable) degree.

Another fun thing to read is people talking about “the good old days“. I mean, yeah, playing vanilla BFE in 2013/2014 for first time in such large numbers every week was truly a feat! But, as a group so oriented on one game, we need to keep on moving forward and evolving. Back in the days, we didn’t even use voice chat - so as owner of the group, I enjoy the times for what they are and I genuinely believe that every year so far has been great on its own. For example, 2017 was the year of the Underground events. And as for 2018 - I see it as the year where our members got a lot closer to one another, and a lot of members met with other members. Personally, I met with all the Bulgarian members and 2019 is starting to look very interesting - last week I met Owlet face-to-face and next week I will be seeing Pan.

We also saw people working together on all sorts of amazing projects and mods - even outside Tennis. We’ve hosted a lot of special Croteam-supported events and contests which were a great experience for the community as a whole.

And so, I wish our members a Happy Seventh Anniversary! I hope you are all having the time of your life in 7Smoke, and I hope we all enjoy 2019 together.