Welcome to the fourth episode of "Mod on the Spot" - it has been some time since the previous article but there are still plenty of old mods integral to 7Smoke history to talk about.

And for this highlight, the mod which we'll be discussing takes that "integration" to a whole new level. This mod quite literally revolves around 7Smoke - it wouldn't have existed without 7Smoke and 7Smoke might not have been as lively without it. This is not a mod you will find on the Workshop, either - actually, it's not just one mod, but several! These "legendary" total conversion campaigns are the 7Smoke Encounters for SSHD, SS2 and BFE, originally created by Biomechanoid and noam 2000!

For every 7Smoke Encounter, you've got two key ingredients: 7Smoke Members degraded to memes and turned into the enemies you battle against, and Roy O'Bannon's (the alter ego of 7Smoke's founder) face plastered into the levels everywhere. Sometimes that'll be a Roy player model, other times there's statues of Roy in Egypt, for some reason. The first 7Smoke Encounter came into existence around March of 2014 - just over two years after the group's creation. It's funny that we had so much going for ourselves at that time that we could fill in a group meme on every enemy - though usually you would just find it to be a member - SpyroGuy as the Spyro Gnaar, Mr. B as the Bucketmechanoid. But there are actual running jokes from time to time - Oh Long Johnson replaced the Kleers, a particular favourite of Noam. As anyone who's ever been to the events knows, the sound replacements of all these enemies together makes for a clusterf*ck of strange voice combinations. And then there's of course the very first appearance of Roy-Zan: Ugh-Zan with a paper mask, a running gag in the group ever since. In a later release of the mod, our group mascot Sparky became his own enemy, with voice lines he made specially for the mod.

Somehow, this inane collection of strange inside jokes became one of 7Smoke's best events, the first one netting us 16 players on its own! Later that year we'd play "Jew of the Noam", the Jewel of the Nile expansion to the mod - aswell as "The 7Smoke Encounter 2 - Battle for the Mansion!". It has the same idea as the BFE version, this time tailored for Serious Sam 2! With SS2 having so many enemy types, we could fit in even more references as obscure as they come. Oh gosh, remember Jill? She was the NETRICSA replacement for the game. Or when we had a member named "Luigi", and he became the Lizard? There's a surprising amount of group history preserved thanks to these mods - members who hadn't been around for ages are still somewhat immortalized through the 7Smoke Encounters, even if we do not play the mods so often anymore. In fact, the last time we played any 7Smoke Encounter was... January 2017?! Has it really been so long? Did we really not do an UNO MAS event for any of these? Actually, maybe it's for the better - the non-7Smoke readers among us have probably already labelled us as crazy for indulging ourselves in such a strange mod.
Later that year we'd play the SSHD version for the first time - perhaps best known for its picture of Roy lovingly staring at you in the main menu. A new idea in this mod clearly stolen from Seriously! Kart in this was the addition of vehicles. Players could ride the Art-Yum-Yum Breakfast Table™, a 7smoke-sponsored cereal and a healthy meal for the start of any day... I mean, why bother asking if we should if we know that we can, right? 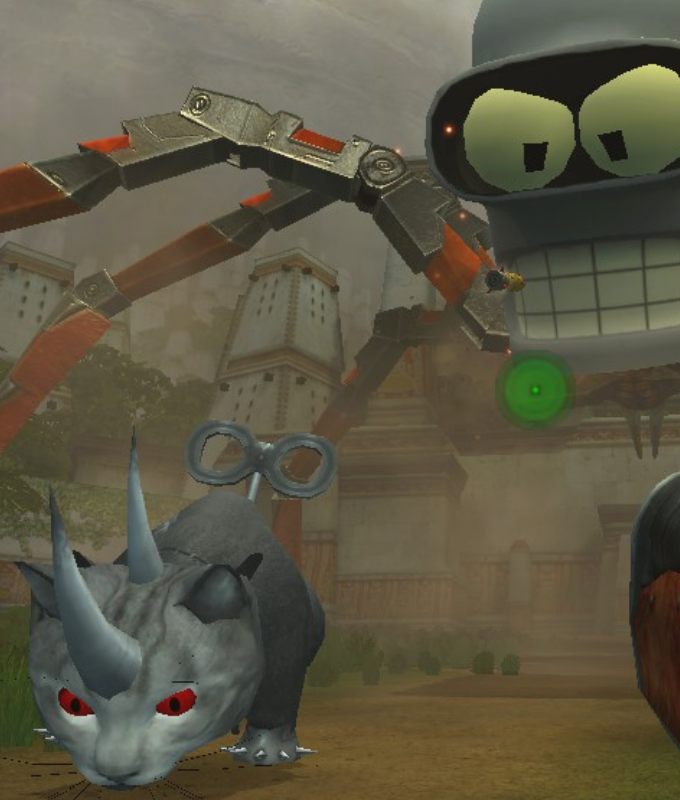 Throughout writing this, there was a question on my mind. Something I didn't understand from the very start but set out to figure out - "Why were the 7Smoke Encounters even made in the first place?". How did the idea come forth? Why is it still here? I approached the creator of the original BFE mod, Biomechanoid, to answer this question - and this was the answer:

It was just an idea Roy had a long time ago and I decided to give it a go. He didn't really ask me to do it, I just decided to do it myself one day."

And there you have it, folks - we can all go and blame this on Roy now. But hey, in the end, there were fun memories to be had with the Encounters. And you can't forget this - do consider that for some members, like Owlet, their first 7Smoke experience WAS a 7Smoke Encounter! Hey, at least they'd be right up to date with all our strange injokes.