Our dear friend and the man behind the voice of Serious Sam, John J. Dick, has been hard at work shaping his very own board game, that has mixtures with drinking games. Indeed: Hammered, subtitled “A Drunken Dungeon Crawl” is a tile-based drinking game perfect for those Friday pub nights - you’ll be building a black and white dungeon maze where you have to go out of your way to collect secret treasures. It’s like Labyrinth, with moving maze pieces and all that stuff - but now you’re an adult and you hardly know when you’re sober. The interesting aspect of this game is, at its core, the unique “battle mechanic” - to defeat the monsters roaming the maze, you must drink! The game is printed on pulpboard coasters (tiles), much like what you would find at most actual bars. There’s a lot of love put into this project as almost everything is hand-drawn and made from scratch.

At the dawn of each turn, the players draws a card - like a chance card, really - which provides them with a specific challenge involving around chugging down a beer or two. Or three. Of course you’ll get rightfully deserved booty for completing this challenge! That booty will be what you’re aiming for, in large quantities, if you want to win! And as you can see, the art of these cards have a unique artstyle that reminds one of a pirate setting. Fitting, considering the abundance of ale and booty!

But some of these cards break the artstyle a little. But, for a very good reason! Croteam has given a greenlight to John to have some small cross-promotion in Hammered - with the Serious Bomb making its appearance as a card! Remove as many coasters (tiles) as you want, but you’ll be having a sip every time you do! Good thing Sam turned legal age last month, or this would have proven very troublesome for him. 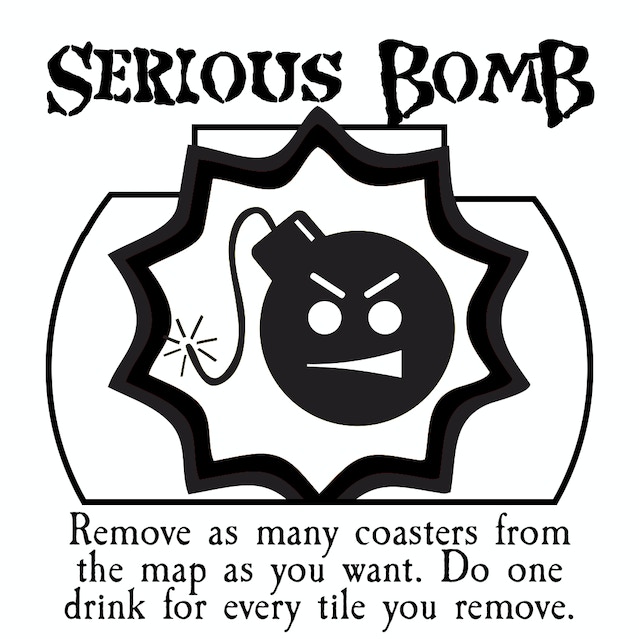 While many of you may not ever play this game, you may consider backing it regardless. John has been a big friend of our community, providing voice lines for free on many of our projects! Who can forget the 7Smoke Tennis 4, where we didn’t know what we were writing - and we ended up writing more dialogue than was needed for a full Serious Sam game - but John did it all for free anyway, because he enjoys his number one role so much. John’s even showed up at an event or two and he’s just a dope person. He has no shame in talking about his nipples, either - truly a fearless man.

If this looks a lot like a sponsored article - it isn’t. We’re helping John out because he’s helped us out plentiful times. We hope that you guys will give a look at Hammered’s Kickstarter - which is currently underway - and if you like what you see - pledge however much you want for this seriously cool game! Even if it is just a dollar, it is a dollar closer to the final stretch goal.
Thank you very much!